Heritage Sabah Blog in blogspot started more than a year ago. Exactly, on 15th September 2010. It is important as the main source for all the Save our Heritage Atkinson Clock Tower effort to protest the 16 storey building next to it.

Time has passed and more have we learned on the process of making sure the historical significant of this city preserved and protected. There are many new challenges ahead for this group or so we may now proudly known as the Heritage Sabah Society that officially registered under Register of Society Sabah on 17th of April 2012.

The reason to move this blog to wordpress is not easy, but this up step to the society need a more formal and professional appearance to be able to meet the future demand of providing information about the society work and effort.

With that a wordpress is the next new platform to host this new phase of this movement. Please do click the address below to go to the new site. 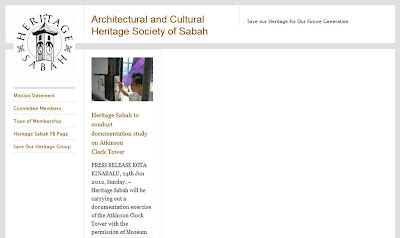 There are still lots of things to do on the new site. Hope you all bare with us of the unexpected changes on layout and others. We will try to make it less obvious for your convenience. 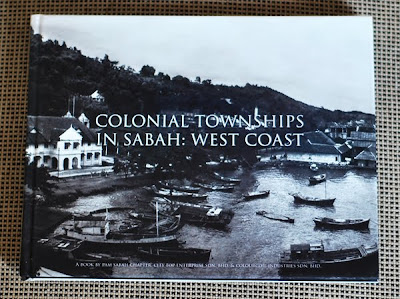 Colonial Townships in Sabah: West Coast is a coffetable book about the early towns of Sabah located on the West Coast Division. The 266-page book covers several towns - from Weston to Jesselton, following the historical railroad started by British North Borneo Chartered Company - as well as other well-known towns such as Menggatal, Tuaran, Tamparuli and Tenghilan.

Old photos from various sources have been compiled into one book that tells the story of how the early townships on West Coast of Sabah originated.

Ever wonder what is the origin of the name 'Menggatal' and other towns in Sabah? Did you know that 'Weston' township was named after Arthur J. West? Did you know that Beaufort township was once known as 'the Venice of Sabah'? The book contains stories of how these different townships got their names as well as some of the interesting history of the various towns.

If you are a Sabahan and wished that you knew more about the history of your hometown, this book Colonial Townships in Sabah: West Coast will be an interesting read - and who knows - you may discover links to your own family memories from the old photos contained inside this book.

Colonial Townships in Sabah: West Coast is a useful source of reference for tourist guides, history buffs, students as well as all members of society who appreciate and want to learn more about Sabah's early history. When we understand our history only then can we understand our modern society today.

It will also make a fine present for our elder parents, guests to Sabah as well as anyone who would appreciate the history of Sabah. 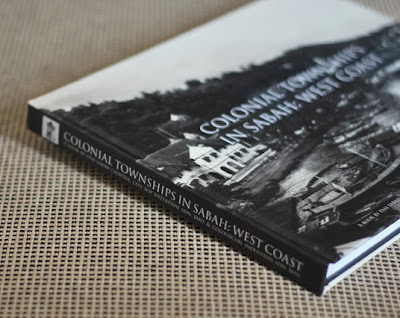 The book is selling for RM140.00 (only on booth sale) on event organized by Heritage Sabah and RM150.00 (pos laju delivery within Sabah) RM170 (pos laju delivery to Peninsular and Sarawak) per copy. It can be ordered by email your bank transaction receipt and address detail.

UPDATE: Due to unforeseen charges in Pos Laju, additional RM20 was added for delivery to Sarawak and Peninsular.

Each book sold and ordered here will be personally signed by Richard Nelson.

For Postal Order, please do deposit your money to the account below, scan the transaction receipt and sent it to sabahheritage@gmail.com for proof of payment included your postal address. Make sure the address is accurate and we will courier post it to you in two working days.

NOTE: Online and booth selling will only available for three month till end of august 2012. After that, you need to go to the book store to get it. Get it now during this time and get Richard Nelson to personally sign the book.

Promote Your Page Too

Promote Your Page Too